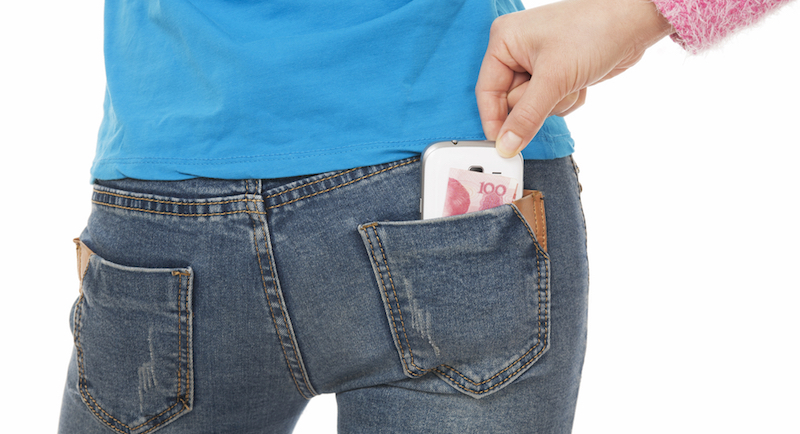 The perfect spot for your cell phone is always the most convenient: the back pocket of your jeans, your coat pocket, your purse, or sometimes even your bra.

A 2013 study looked at just that, the effects of prolonged phone exposure directly against your skin, more specifically your breast tissue. The study highlights 4 females between the age of 21 and 39 that routinely carried their cell phone in their bra for up to 10 hours a day for several years, and in the area directly beneath the direct phone contact developed tumors, despite no family history or common breast cancer risk factors.

Case #1: A 21-year-old who routinely tucked her phone in her bra for several hours a day presented with bloody nipple discharge. Her mastectomy revealed extensive ductal carcinoma in situ (DCIS) with multifocal microinvasion.

Case #2: 21-year-old who kept her phone in her bra for 8 hours a day for 6 years found a breast mass directly below the phone contact area. Her mastectomy showed multifocal invasive cancer with extensive DCIS, some lymph nodes showed metastatic disease, and further studies showed metastasis to the bone.

Case #3: A 33-year-old found a mass in her breast directly beneath where she frequently placed her phone in her bra, and she had been doing this intermittently for 8 years, more recently during her runs 3-4 times per week with the GPS turned on. The results of her mastectomy showed extensive DCIS with multifocal invasion.

Case #4: A 39-year-old woman who routinely tucked her phone in her bra while talking on a bluetooth device for several hours each day for 10 years presented with three palpable breast masses in the area of phone contact. Her mastectomy showed four separate invasive ductal carcinomas

“Pathology of all four cases shows striking similarity; all tumors are hormone-positive, low-intermediate grade, having an extensive intraductal component, and all tumors have near identical morphology. These cases raise awareness to the lack of safety data of prolonged direct contact with cellular phones.” (source)

The conclusion of the study made a few important points not to be forgotten:

While you may consider these just “extreme cases,” what could your phone contact still be doing to your body and more importantly, your children’s body at a more conservative usage level? Do you want to find out?

While cell phones do caution to some degree to avoid direct contact, such as the iPhone 4, advising users to keep the phone 1.5cm or more away from the body, don’t let new and changing technology get the best of your health. Practice safe use and turn your phone on airplane mode when it’s not in use, always avoiding direct contact with your body.