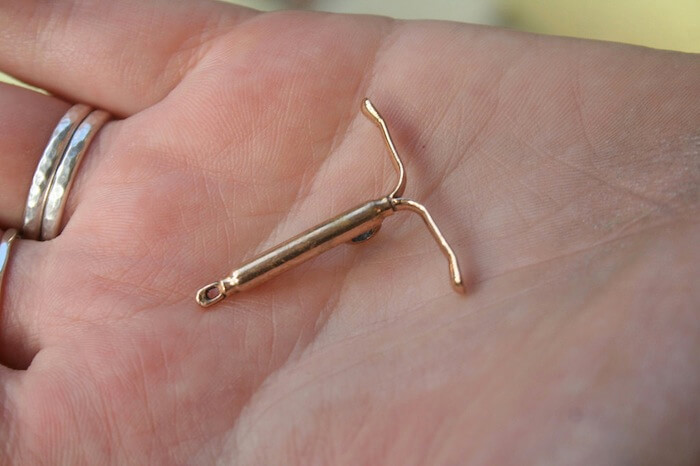 Copper IUDs have soared in popularity as a hormone-free birth control choice for females. What your doctor doesn’t know about the harmful side-effects of copper could significantly harm you. If you have a copper IUD and are experiencing adverse symptoms, then this post is for you.

What is a Copper IUD and How Does it Work?

Per the Mayo Clinic’s definition, a copper IUD is an intrauterine device (IUD) that’s inserted into the uterus for long-term birth control (up to 10 years). It is a T-shaped plastic frame with copper wire coiled around the stem and two copper sleeves along the arms that continuously release copper into the lining of the uterus. This process produces an inflammatory reaction in the uterus that is toxic to sperm, which helps prevent fertilization.

Proponents of the copper IUD make a lot of claims that it is a better and safer form of birth control, even citing studies that copper ion levels released by IUDs are too tiny to impair human health. The two main claims that I will debunk that are completely false are:

These claims couldn’t be further from the truth, with many females painfully finding this out the hard way. In fact, I have yet to work with a single female in my practice that hasn’t been adversely affected by the copper IUD.

Commonly disclosed side-effects include: cramping, bleeding between periods, and severe menstrual pain, but this only a very small part of the overall story when it comes to copper and females.

The overarching narrative to this story is that copper and estrogen share a very intimate relationship with one another because estrogen increases copper retention in the body. It has been estimated that almost 85% of females (of all age ranges) are adversely affected by a common, yet little known condition called copper overload or copper toxicity, and have no idea it’s the cause of their distress. This makes implantation of a copper IUD in a female that is already (and usually unknowingly) overloaded in copper a recipe for disaster.

To make matters worse, few doctors are aware of this condition, thus unintentionally prescribing hormones and/or devices that could negatively impact your health and well-being.

What is Copper Overload/Copper Toxicity?

Copper overload, often hereditary, is an inability to effectively eliminate excess copper. It is not the same as Wilson’s Disease, a life threatening and rare genetic disorder where copper accumulates in vital organs and glands.

Copper has the ability to profoundly affect every system in the body especially the reproductive, nervous, and glandular systems, and it has a devastating effect on mental health. This explains why common, yet undisclosed side-effects of the copper IUD include severe anxiety and panic attacks, depression, hair loss, anemia, increased anger and rage, brain fog, spaciness, paranoia, fatigue, and increased infections (yeast being the most common) to name a few.

As a metal, copper is a great conductor of energy, (you know how that energizer bunny keeps going and going) which gives credence to symptoms of insomnia, racing thoughts, heart palpitations, and dizziness after a copper IUD is inserted, symptoms all of my female clients have complained about after trying this method of birth control.

As I mentioned previously, estrogen increases copper retention in the body. We live in an estrogen dominant world and it is well documented that estrogen dominance plays a direct role in the development of many cancers including those of the breast, ovaries, and cervix.

Additionally, impaired methylation synthesis is also a major factor in today’s soaring cancer rates. You can view the research here.

With copper high, zinc becomes imbalanced. Zinc is an essential nutrient in the healthy functioning of all our bodily processes. It enhances resistance to stress, maintains intellectual function, memory, and mood levels, and is an important component in the creation of all hormones. Zinc is also a major player in the creation of our bodies master antioxidants, metallothionein and glutathione, both of which are needed for every body system to function optimally and protect us from disease.

Without adequate zinc, we become prone to pathogenic infections as well as diseases caused by an uncontrolled division of abnormal cells.

Other Things to Consider With a Copper IUD

Practitioners are often told to inform patients that adverse menstrual irregularities will eventually subside after insertion of a copper IUD, but I have found the opposite to be true. Disorders such as endometriosis, polycystic ovarian syndrome (PCOS), premenstrual dysphoric disorder (PMDD), and premenstrual syndrome (PMS) actually tend to increase in severity and duration after a copper IUD is implanted.

Postpartum depression (PPD) and psychosis are directly connected to elevated levels of copper, especially with multiple births because copper levels increase with each pregnancy (copper is needed to make blood vessels) and do not go back to normal post-birth. When I hear about women drowning their children, committing suicide, or shooting their husbands, I wonder if monitoring their copper levels would have helped prevent such sad stories.

Copper overload has a strong heritable component, which means that it is often passed down from generation to generation, something we call Transgenerational Epigenetic Inheritance (TEI). If all the females in your family share similar symptoms like mine do, copper toxicity may be the underlying cause.

Copper overload is a very treatable condition, one I’ve been blessed to overcome after a lifetime of pain and struggle.

I break all of this down for you along with 100 easy and delicious recipes for every occasion in my low-copper cookbook. My cookbook also includes healing tips, more in-depth research, time-saving planning and preparation methods, and a 2-week meal plan.

This article originally appeared on Samanthagilbert.com and was republished with permission from the author.

Ready to find out your copper levels?

Enter your email below to learn all about the best way to understand your own copper levels with hair analysis.